In a 10-minute video, Project Veritas exposed Salesforce executives bashing the GOP for the mostly peaceful protests at the Capitol on January 6, just weeks after the Customer Relationship Management (CRM) company unexpectedly severed ties with the journalistic nonprofit.

The footage from virtual meetings held by high-level executives was sent to Project Veritas by a whistleblower inside the company, according to Veritas’ founder James O’Keefe.

“Since the events of the 6th [of January], I think one of the things that really impacts Salesforce is the national conversation about the role of technology in inciting that mob, disseminating misinformation and fomenting extremism,” the company’s COO Bret Taylor said. “What we’ve done in light of the events of Jan. 6 is recognize a much broader range of messages that have the potential to incite politically motivated violence.” 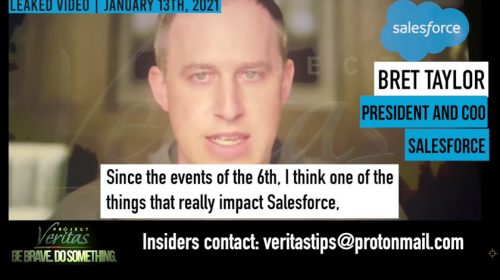 Taylor said that the company would ban the RNC from sending messages on behalf of President Trump, and that it would axe any of its customers who even questioned election integrity.

“We’ve engaged with the RNC to communicate that no messages on behalf of President Trump and no messages questioning the validity or integrity of the election are allowed on our platform under the guidelines that they may incite violence,” Taylor said.

It is unclear in exactly what capacity the RNC was using Salesforce.

“We’re looking across our customer base to make sure our technology is not being used by businesses or platforms that are inciting political violence,” Taylor said.

Project Veritas also bore some of the brunt of the Silicon Valley tech giant’s new policy.

“Upon consideration, Salesforce has made a business decision not to extend our relationship with Project Veritas to the use of other products,” the company said in an email to Project Veritas dated January 27.

Eric Loeb, Salesforce’s executive VP of government affairs, assured the others in the virtual meeting that company was pausing all of its contributions to Political Action Committees (PACs), and that “the pause or suspension certainly includes the suspension of any contributions to members of Congress that voted to object to the [presidential election] certification.”

Salesforce has its own PAC, the salesforce.com PAC, which donated $64,000 to political candidates in the 2020 election cycle. About 60 percent of those donations went to Democrats, including $2500 to House Speaker Nancy Pelosi (D-CA-13), whose congressional district is home to San Francisco and Salesforce’s headquarters.

Craig Klein, president and CEO of SalesNexus, a Salesforce competitor, spoke to The Tennessee Star about CRM’s joining the censorship feeding frenzy.

“It keeps happening,” he said. “New vendors keep jumping on the bandwagon. It’s mind-boggling. I’d love to know what their board members are thinking and how they make these decisions.”

He noted that Taylor, in his explanation for Salesforce’s censorship efforts, arbitrarily decided to expand the language that the company considers to be against its terms of service. Klein also noted the boldness of Salesforce, who targeted the RNC for censorship immediately upon changing its speech code.

“They picked the RNC,” he said. “They’re just putting it [conservatives’] face and saying ‘we’re shutting you down.’ They’re making a statement, here. It’s so brazen.”

When asked if he thinks there’s a limiting principle to the censorship, or if it will continue unabated, Klein said he thinks the best solution is to build infrastructure that is not reliant upon leftists in Silicon Valley. He noted that websites like Gab and Parler are popping up as alternatives to Twitter.

“The mistake that we’ve made is let them get to this dominant, monopolistic point,” he said. “This situation is unique in that you don’t pay for a Twitter account. This is different because the RNC is paying them a lot of money. They’re just saying, ‘we don’t want your money.'”

“I’m confident there will be a backlash,” Klein said. “I think we’re already seeing it in the social media space.”

Pete D’Abrosca is a contributor at The Tennessee Star and The Star News Network. Follow Pete on Twitter. Email tips to dabroscareports@gmail.com.
Photo “Salesforce Video” by Project Veritas.

The Star News Education Foundation is a non-profit corporation founded in December 2019 by the management team of Star News Digital Media, Inc. for the purpose of returning K-12 education in the United States to its former status as best in the world by 2030.